Today we were able to worship with in the Haitian church at MPCA.  As songs, psalms and prayers in Creole resonated throughout the open air building, we were little more than spectators. Steve Bowlin admits he was amazed by the sincerity of the worship as we witnessed the young and old with closed eyes and raised hands, praising their heavenly Father. The Haitians frequently echoed Merci Seigneur!  Merci Seigneur! Merci Seigneur! (Thank you Lord!) While most of the thirteen team members know Spanish, none speak Creole, and only a few can recognize French. In fact, one of the concerns expressed in our first team meeting under the pavilion by the ocean here at the mission center was the ability to communicate. In that first meeting veteran team member Pastor Herb Codington mentioned that many try to serve from a posture of strength, but true service comes from a posture of weakness. In the worship service today, David Rath was able to expand on that idea of weakness by speaking on the story of Gideon and how God told Gideon, “You don’t need men, you need me.” Though we are not facing a battle this week, we are like Gideon’s men.  We have ten from our group who will be working with around 150 students each day.  They will be teaching how to be the hands and feet of Jesus.  Four of our group along with two Haitian teachers will be training approximately other 120 Haitian teachers. Given the language barrier, those odds are a bit worrisome. But with the promises of the Lord and the prayers of His people, the Lord will be victorious. 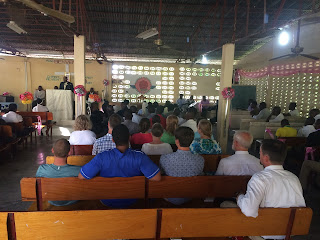 
Today was a good day. I was able to lead a group of Haitian children in a few games. I had a plan for what games we would play but those didn't work out because the kids had traditional games they played. Tonight, we spent time with a group of kids at the service we had. It was tough to communicate what we were talking about with the language barrier and all. But, it was still a successful discussion. It has been great thus far.


-  Drake
Our first day of camp, in my opinion was very successful. We started by riding in a cattle truck to our first school, which was about 20 minutes away from our mission house. The scenery in the cattle truck was absolutely breathtaking with so many mountains and beautiful fruitful trees. We had about 107 St. Marc students for our soccer camp and VBS. The ages of the children were three to sixteen. Griffin, Nathan, Steven and I lead the soccer part of the camp. We had the children do shooting, passing and then played girls and boys. The girls were requesting to play against the boys and ran around and were screaming for about two minutes. They gathered and started to play, the girls not doing too well (5-0) requested that I play on their team. After scoring for the girls, they all went crazy. Seeing all the smiling and welcoming children who wanted to be held, hugged or learn more about God and English were the highlights of my day. This evening we did a Bible study with young adults from MP schools with the theme of “Your Identity in Christ”. They were very open with us and I loved hearing their dreams for their future and how they plan to serve God and their community and ultimately their country. Even with a language barrier, it is still amazing to be able to show love and Christ through our VBS and the beautiful game of soccer.
- Kayla 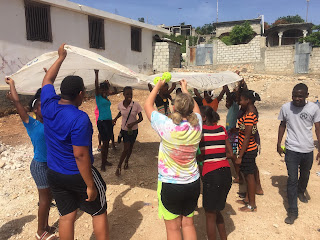 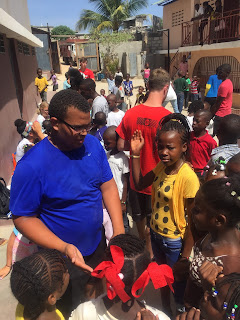 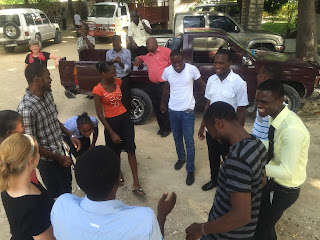 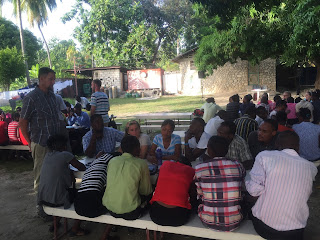 
The teacher seminar is going great.  We have around 120 teachers attending and they are enjoying the learning and collaboration.  We have four American instructors and two Haitian instructors.  Each morning starts with devotions and worship.  We are all learning from each other and it has been amazing. 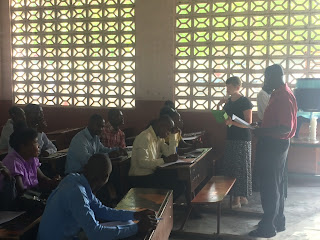 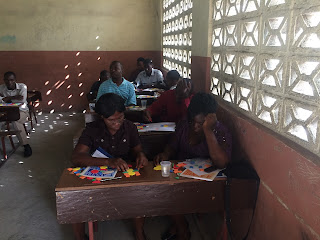 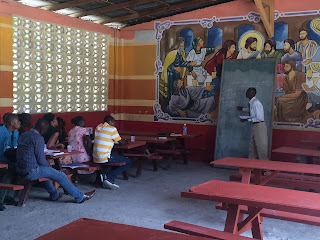 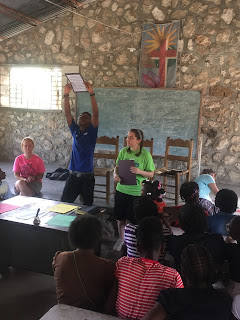 
Today we made our first hike of the trip as we traveled up to Dupin. We did another day of VBS and ended up having approximately 160 kids show up! I was in the craft/evangelism group and led, with the help of a translator, the kids through the Gospel while making beaded bracelets. It’s always so fun hearing the kids scream out what each color means and to see the story of Jesus’ love make sense to them in a really simple way. On the way back down the mountain, Emilee and I each suddenly had a child that wanted to hold our hand and lead us down the path. The way they made sure that we walked on the part of the path that wasn’t as dangerous, and then went as far as to throw big rocks in the river for us to use as stepping stones, was a testament to the way that these kids love unconditionally.  They just genuinely enjoyed us taking time to be there with them, hold their hands, and love them. Love is a language that definitely doesn’t need to be translated! Later this afternoon, we held our third session for teenagers. It’s been really cool to break into small groups and to get to know the Haitians in our group better each day. They are starting to open up more and share the struggles that they face as Christians in their culture, but it’s been so fun to joke around with them, too. The best part of the event was the epic song/dance battle that happened between the Haitians and our group! 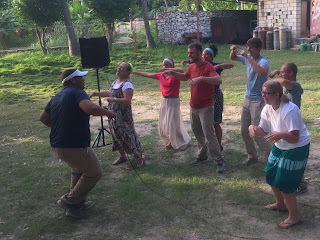 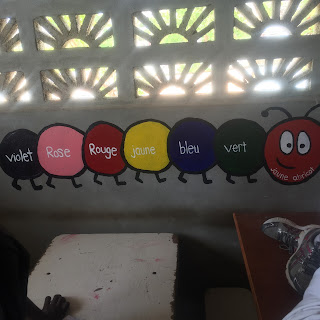 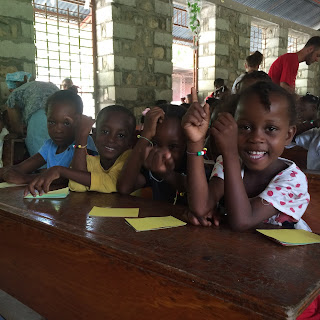 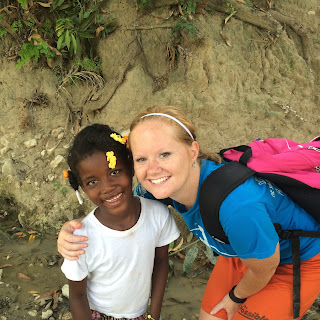 Today we went to Dupin.  It was the first time we had to hike to get to the school. The hike was not very long but it was hot and wet. Some of my favorite parts of the trip so far include: just being with this group of people.  I’m learning some new words in Creole.  I love doing VBS with the little kids in the morning.  I didn't think I was going to like it as much as I do.  My favorite school so far is Chardene.   Those kids were awesome.  I miss my family and air conditioning and my bed, but I wouldn't change anything about this trip. 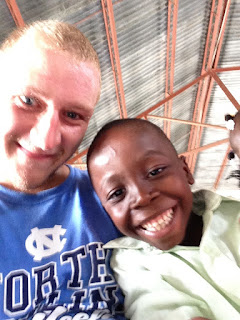 
First of all I just want to say God is good! It’s amazing how much He has shown that He can use me in such a short amount of time here in Haiti. Not only that, but how much the Haitians have taught me about a simple faith and unconditional love. I came expecting to help them, and seeing how much they appreciate us gives me a change in heart. Our translators Carter, Tyson, and Jean have been with us everyday and each day I have asked many questions about Creole. They absolutely love when we ask questions about them and their language, so they always quiz me the next day and laugh at my pronunciations.  They always have a huge smile when I can have a conversation with them or the little kids.  The kids especially have so much fun when I show them the words I know, I count to 20 and say each color, then I teach them the English words for it. I think they are appreciative when we want to learn something from them. With that being said, today we hiked up to Degeance where there was very little space to play, but we improvised.  I walked up to a few little girls and asked them their name and age, told them their hair was pretty (Chave bel). The kids show us so much genuine love and they truly want to be loved, so being an example of God to them is such a wonderful opportunity. During the camp, I led games and I played guitar for each age group and we taught them the motions to “Lift Your Name on High” and at the end we all sang and danced to it together. As hot as it was, listening to them praise with us in their language gave me chills.  It has been a humbling experience and huge blessing to be here.
-Erin 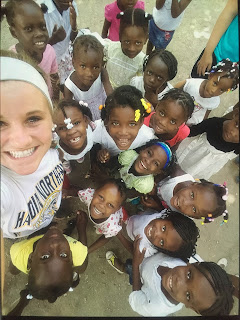 Sac passé!(What’s up) This week has been an awesome experience.  I have learned how giving and open those in the Haitian culture are.  When first arriving in Haiti, I saw how much more difficult the essentials for life are to come by and the way of life is much simpler.  Yesterday we played the high school and college age Haitians who have been coming to our evening meetings at soccer!  We had a great time playing against them even though we lost 3-6.  It was difficult playing on their field with all of the rocks and no grass.  I am looking forward to coming back to the U.S. for all of the amenities, but also at the same time I don't want this week to end.  I was playing with some of the little kids and would pick them up and spin them in a circle or throw them in the air and after I did that to the first kid I had a swarm of kids run over all hugging my legs and asking to spin them next.  After doing that to about thirty to forty kids, I was done but looking down and seeing how ecstatic their faces were, I couldn’t stop.  I’m so happy that God gave me this opportunity and thankful for it.  I couldn't ask for a better group of people to experience all of these things with.


~Steve
Bonjour! As someone who, before this week, had only been to the Dominican Republic, this week was an incredibly different experience. The two countries, while sharing an island, differ in many aspects of their culture and ways of life. Both of the countries share the island of Hispaniola and similar flora and fauna, however, their similarities stop fairly short after that. The most noticeable difference is the language. While the D.R. speaks the well-known Spanish language, Haiti has it’s own unique language of Creole, which is essentially a mix of French, Spanish, and English, making it very hard to learn and translate. The other distinct difference is the terrain. While the mountains of the Dominican are lush and rich with an infinite number of greens, Haiti’s have been stripped barren and are a solid dusty brown. Haiti also brings along the strange and mystical voo-doo religion that has just recently lost its grip on the country. If asked which country I liked more, I couldn’t give an answer. The two experiences are not at all the same so comparison is impossible. Haiti has given me a new perspective and opened my eyes to missions outside of the Dominican Republic. 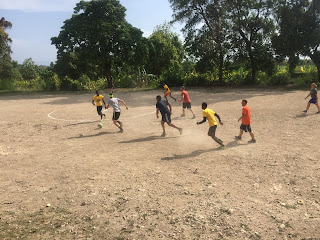 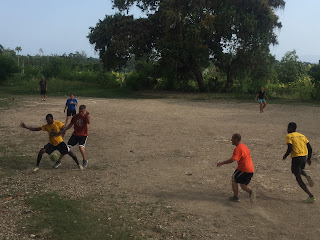 Posted by Mission Possible at 3:35 PM